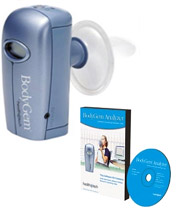 This article will compare the Korr MetaCheck with the Microlife BodyGem.

Let’s start with validation.  Both indirect calorimeter devices have been tested against the gold standards of the metabolic rate testing, the Douglas Bag and hospital devices such as the DeltraTrac Medical Cart.

Our device is being used to assess metabolic changes in The Biggest Loser™ contestants. “We chose to use the MedGem device based on its accuracy in comparison to other indirect calorimeters.” said Dr. Robert Huizenga, Associate Professor of Clinical Medicine at UCLA and Medical Advisor to The Biggest Loser

The BodyGem is the same type of indirect calorimeter as the MedGem, but it’s designed for professionals who don’t need to make insurance claims.

The Korr Filter is in the device, so it doesn’t get changed with each client. The filter is replaced every 100 usages.

The Body Gem filters are in the disposable mouthpieces, so that each client breathes through a NEW filter.

The Korr MetaCheck is a box-type design and it sits on a desktop.

The BodyGem is a compact, hand-held design, and it comes with a carry bag to allow you to perform RMR measurements anywhere.

The Korr Metacheck is designed to be used with their printer and paper.  Their preprinted paper is $20 per 100 sheets.  With 2 sheets per test, that’s an extra $.40 per test.

BodyGem Analyzer can be loaded on various computers and printed from any printer.  No special paper is needed.

The Korr MetaCheck sensors must be replaced every two years at a cost of $225.

The BodyGem has 2 year warranty and the sensors do not need to be replaced.

BodyGem mouthpieces with integrated medical-grade filters are $9.50 each.

And an entry-level priced BodyGem 40 System Kit is available

To get more information:

I wish you the best of health!

We offer several different MedGem and BodyGem System Kits depending on your needs.

Your Clients Weight Management Success Is Just 3 Steps Away

3. Empower them to hit their Daily Calorie Budget on a consistent basis.